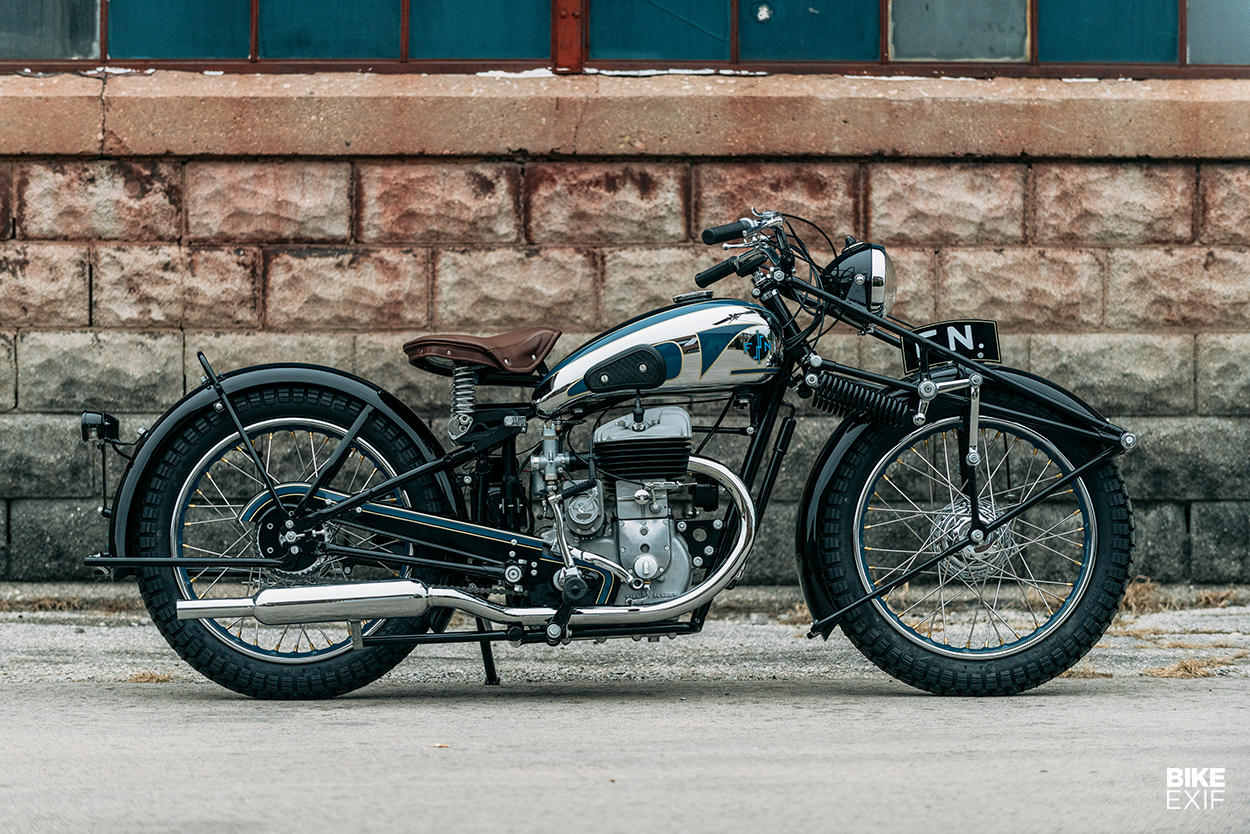 There’s not much that still surprises us these days, but you can’t beat a crazy suspension setup. And they don’t come much stranger than the bizarre cantilever arrangement used on Fabrique Nationale motorcycles.

Variously known as a ‘wheelbarrow’ or (more respectfully) a ‘trailing link girder fork,’ there’s never been anything else quite like it, before or since. And thanks to this amazing restoration by Retrospeed of Wisconsin, we can get a closer look. 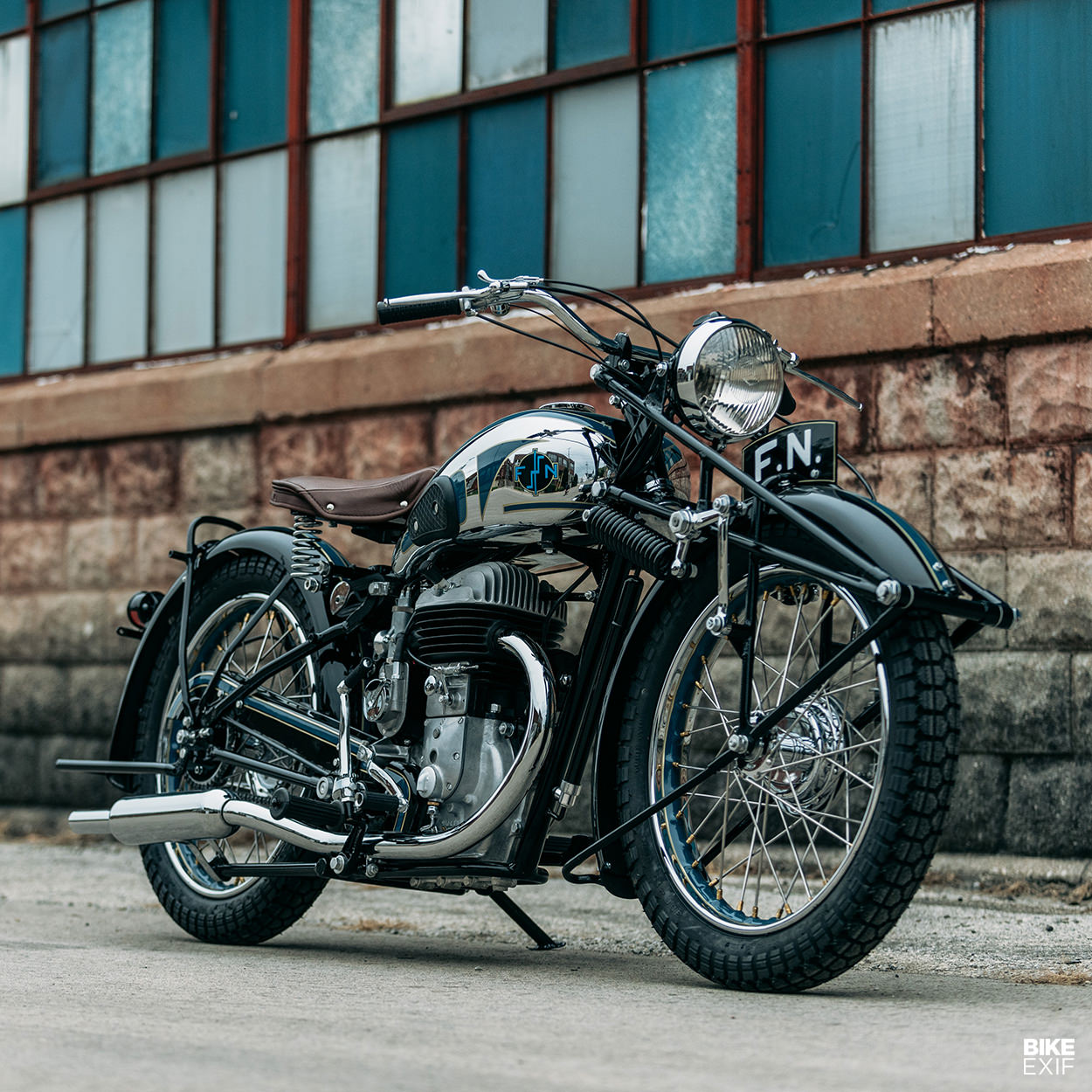 FN deserves a higher profile outside of the Low Countries of Europe. It’s one of the most storied names in motorcycling and like BSA and Royal Enfield, the Belgian company has a background in small arms. Today, it’s one of the biggest firearms makers in the world, but sadly, it stopped making motorcycles in the mid 60s. 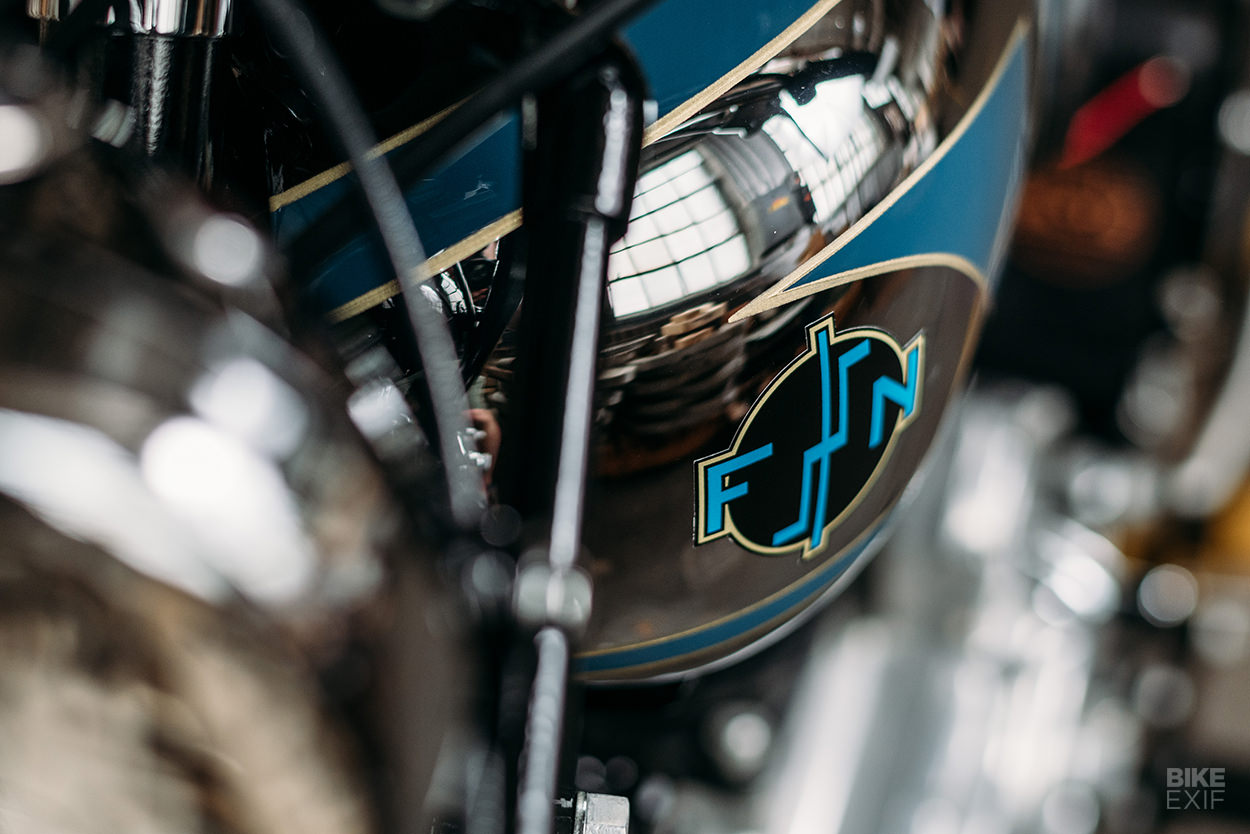 This Model 13 from 1947 is the kind of restoration you’d expect to see from a grizzled old veteran with a huge Monarch lathe in the corner of the garage. But it’s actually the work of a very talented 27-year-old from Wisconsin: Donovon LeVan.

In Retrospeed’s Ozaukee County workshop, Donovan focuses on European and Japanese motorcycles. He handles everything from basic servicing to concours-level restorations, and for someone so young, he’s remarkably good at his job. 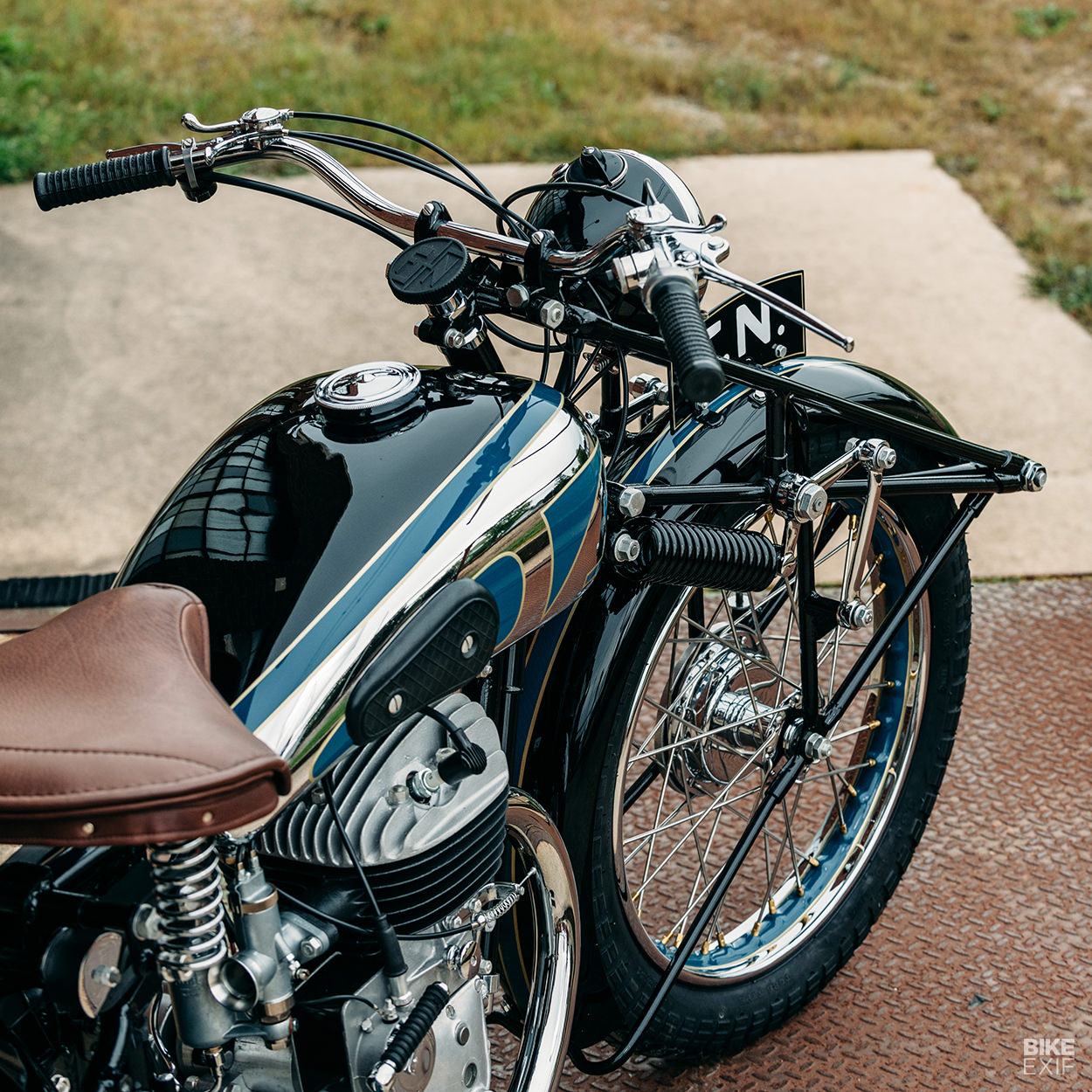 That’s probably because he’s already been riding for well over a decade. “I got my first bike at 15—a 1975 Yamaha XS650,” he reveals. “I moved to Milwaukee to pursue architecture as a career, but dropped out of school because I thought that working on vintage motorcycles sounded way more fun.”

Donovon landed a job at a small shop specializing in concours restoration, and he was obviously a very quick learner. “They taught me everything I know, which I am very thankful for—considering they don’t teach things like points or carburation in motorcycle programs anymore.” 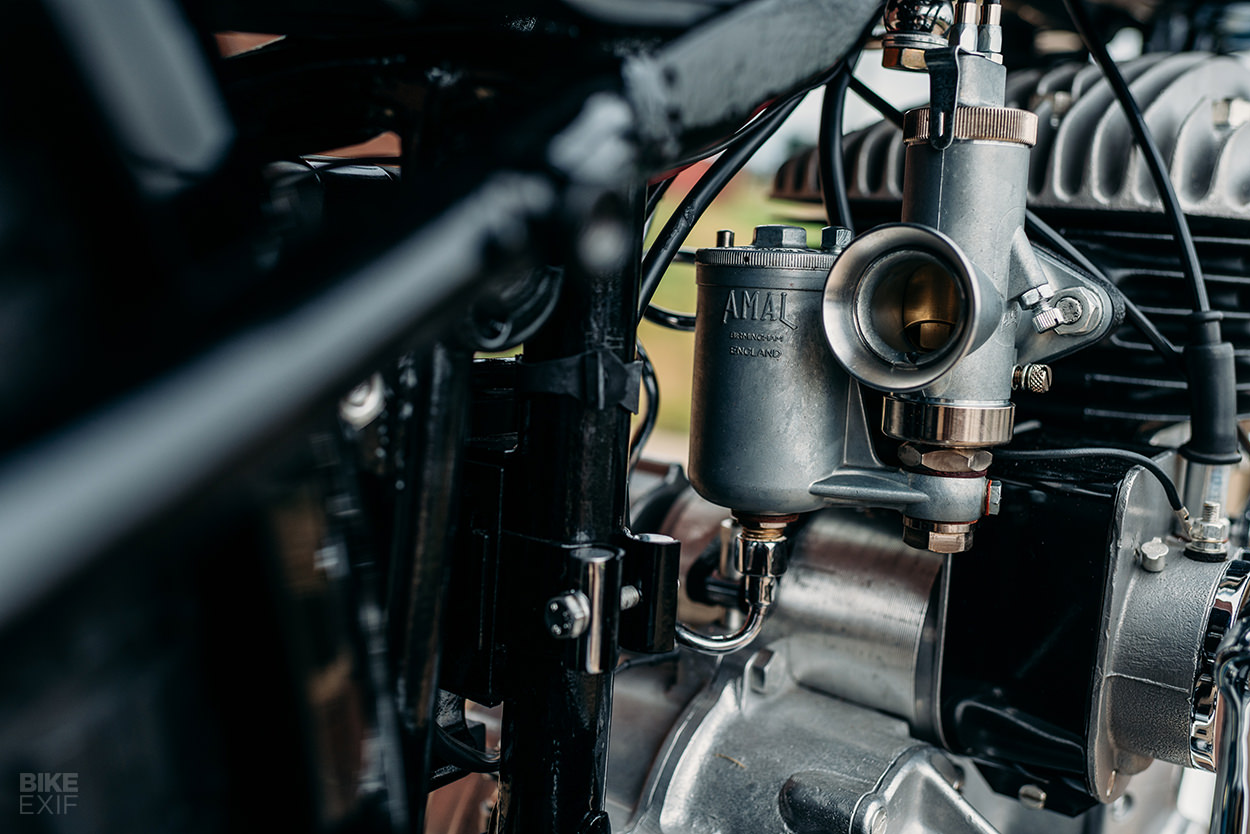 This FN is Donovon’s fifth full restoration at Retrospeed, and took around 18 months to complete. The commission came from a museum fascinated by the unique characteristics of the bike.

“That’s the ‘Neiman’ rubber band rear suspension, and the ‘pulled wheel’ or ‘wheelbarrow fork’ front suspension,” says Donovon. “The FN actually had success in off road races, due to the amount of suspension travel compared to girder forks!” 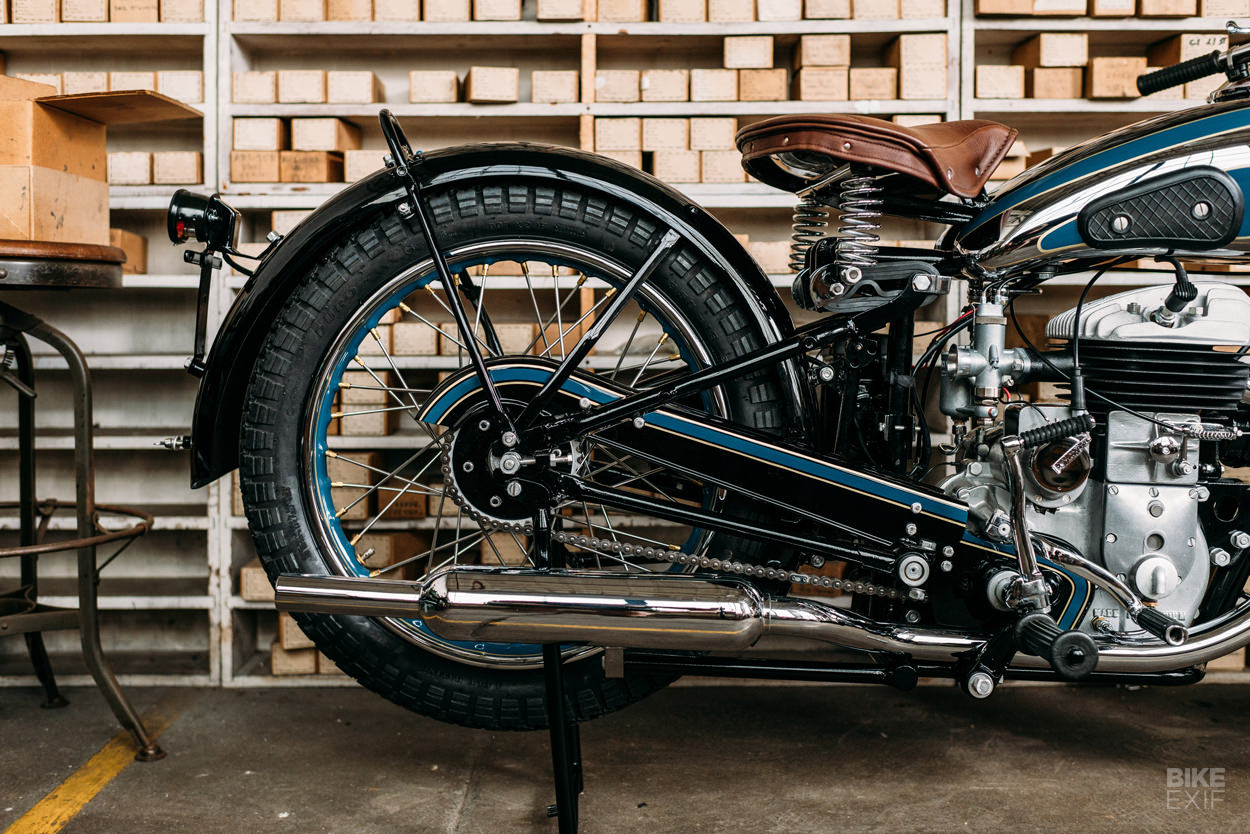 Despite being in dilapidated condition when it arrived at the Retrospeed workshop, the FN now runs and rides just as it did when it left the showroom floor over 70 years ago.

“The project was hyper-difficult,” Donovon admits. “It was extremely difficult to find documentation, and parts are not available. Even the paint scheme required heavy research and overseas connections—since photos are in black and white, and there are next to no good original examples to pull from.” 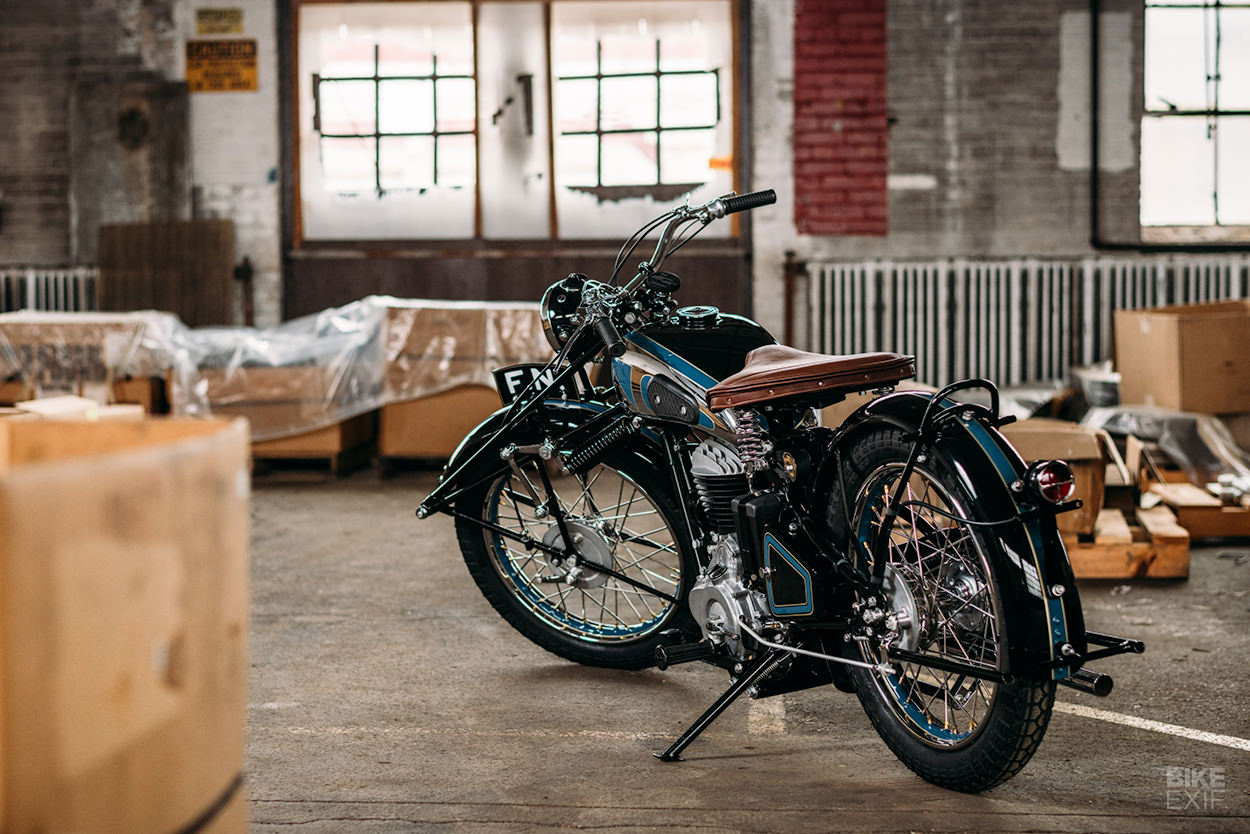 “The hard part was determining what had been changed by human hands in the last 74 years,” says Donovon. “I was all over the internet for weeks with no luck. Finally, a referral led me to Jacques Maertens in Brussels. He has been collecting anything FN since the 90s, and sent me thousands of pages of documentation.” 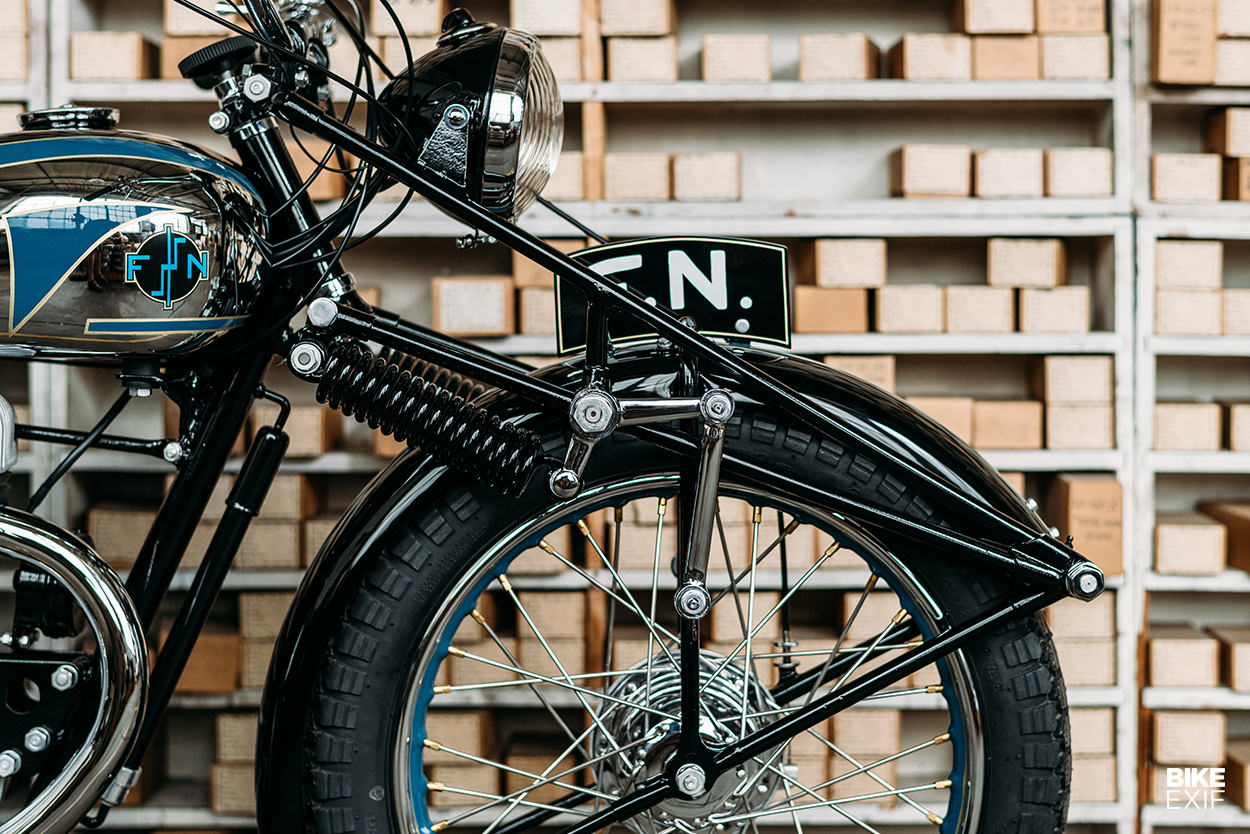 It was the breakthrough that Donovon needed. Aside from being able to get the suspension back to the optimum working order, he could spot the modifications made to the M13 and revert it back to showroom spec. “The bike was blown apart and the restoration started.”

Retrospeed created new steering head bearings and front end bushings, and machined up screws, nuts and bolts from scratch. The clutch and brake levers were brazed and straightened. A new horn switch was built up, and the fenders were drilled apart, repaired, and riveted back together. 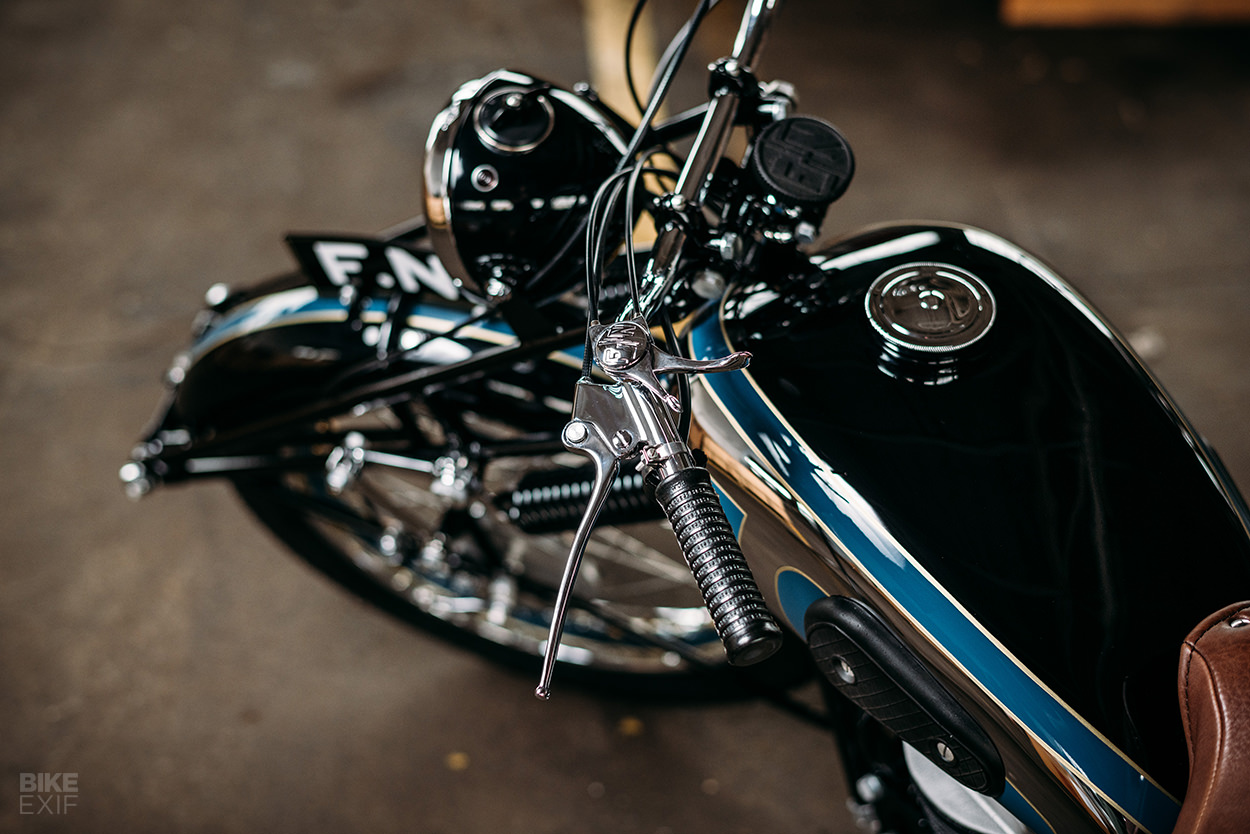 “We were even able to source grips and footpeg rubbers, thanks to Jacques. And we found a bare steel reproduction exhaust, plus rubber for the rear suspension and horn.” New kneepads for the tank were recreated using the original mold that was used in the factory, and Retrospeed were also able to find a headlight bezel and headlight switch—because they were used on Vincent motorcycles too.

“This being said, the parts we had to source did not come easy,” Donovon notes. “It was about seven months before we were able to get our hands on them—due not only to Covid, but also to confusion with the postal service. We are in the city of Belgium in Wisconsin, not the country of Belgium where the parts were coming from!” 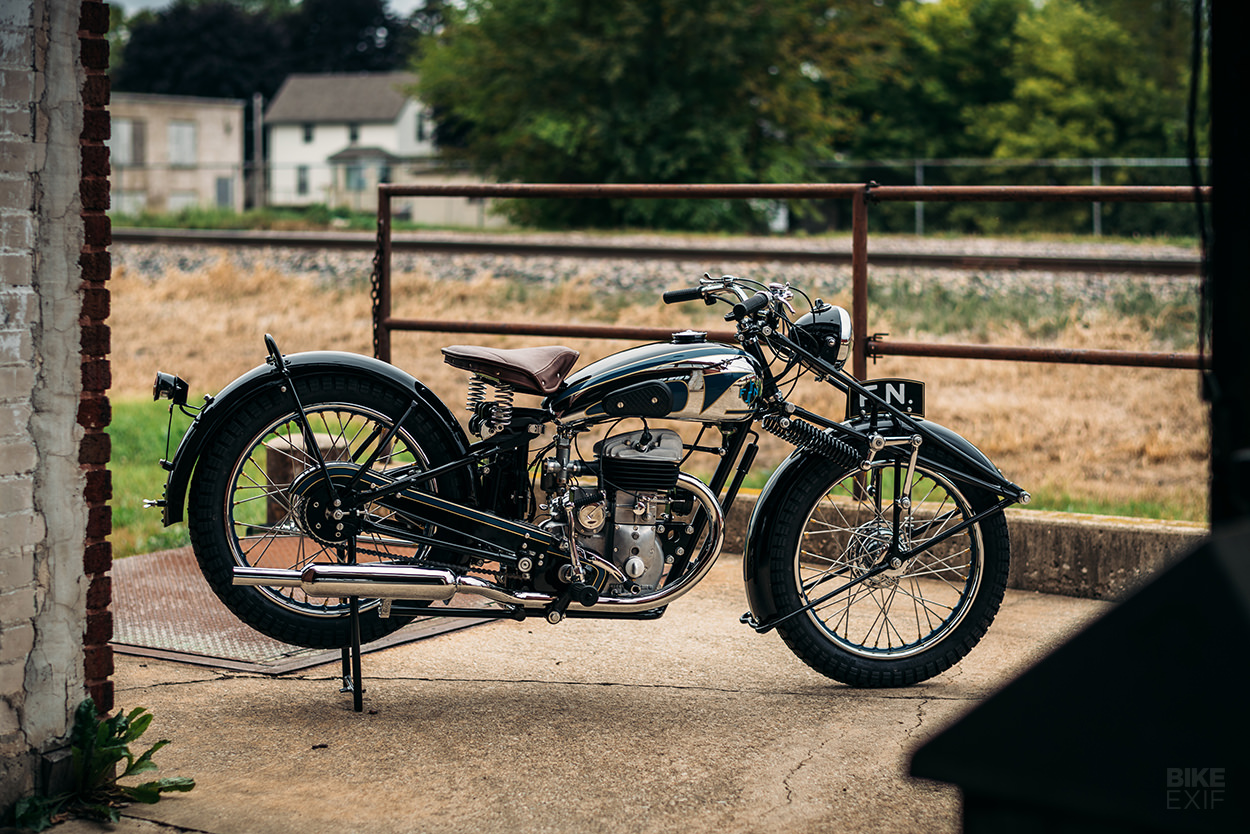 Despite these issues, Donovon’s perseverance has led to one of the most authentic FNs in existence. Even the color is spot on.

“Jacques was able to find a very worn M13 tank, and when he removed the old kneepads it exposed a beautifully preserved blue. He also told us that the striping was gold or yellow, whereas you mostly see people striping these in white.” 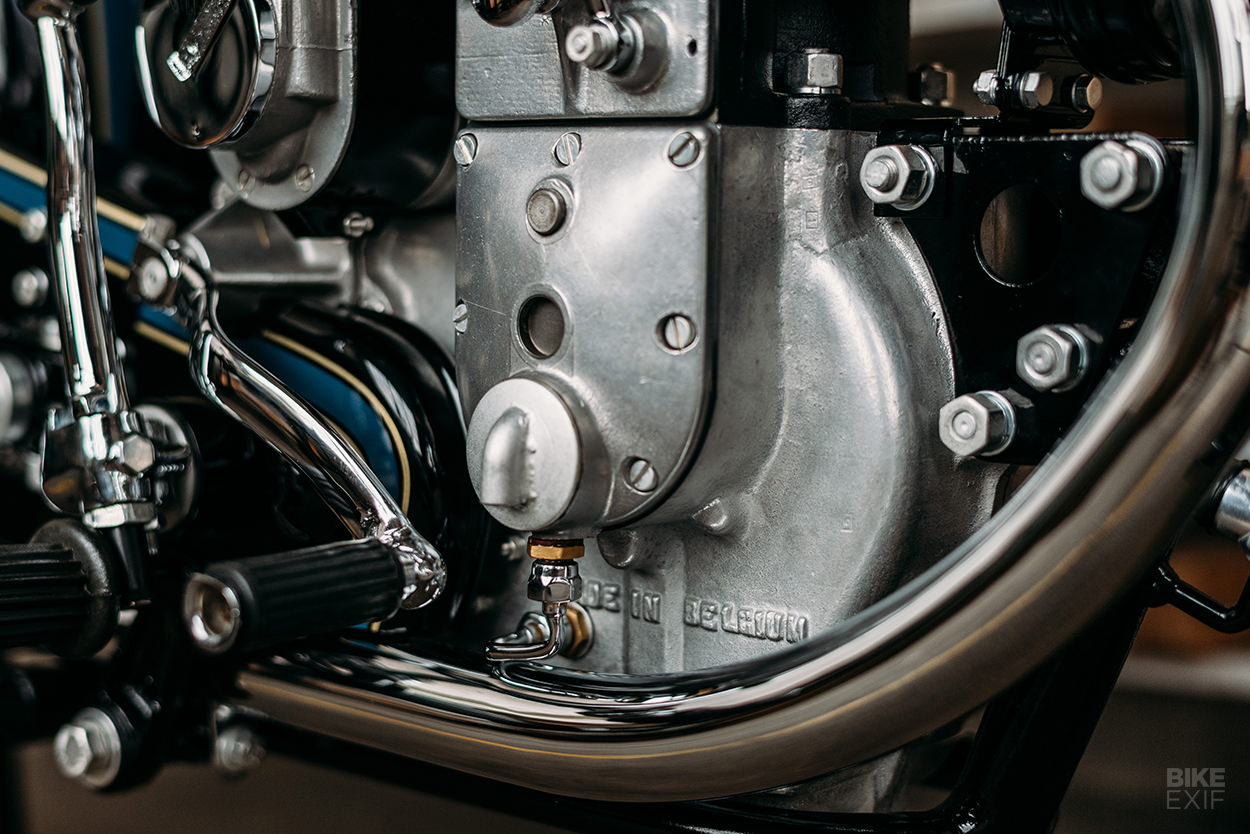 The hardware is now cadmium plated, and the engine cases have been tumble polished for a ‘freshly cast aluminum’ look. The engine and dynamo were restored in house, and Donovon discovered that steel exhaust valves from a ‘98 Corvette matched the FN specs. They dropped right in, with slight modification.

“I’ve restored four Japanese motorcycles here at Retrospeed, but this was a very different process,” he concludes. “It took a lot more time behind a computer, doing research and translating. Nothing seemed to be straightforward.” 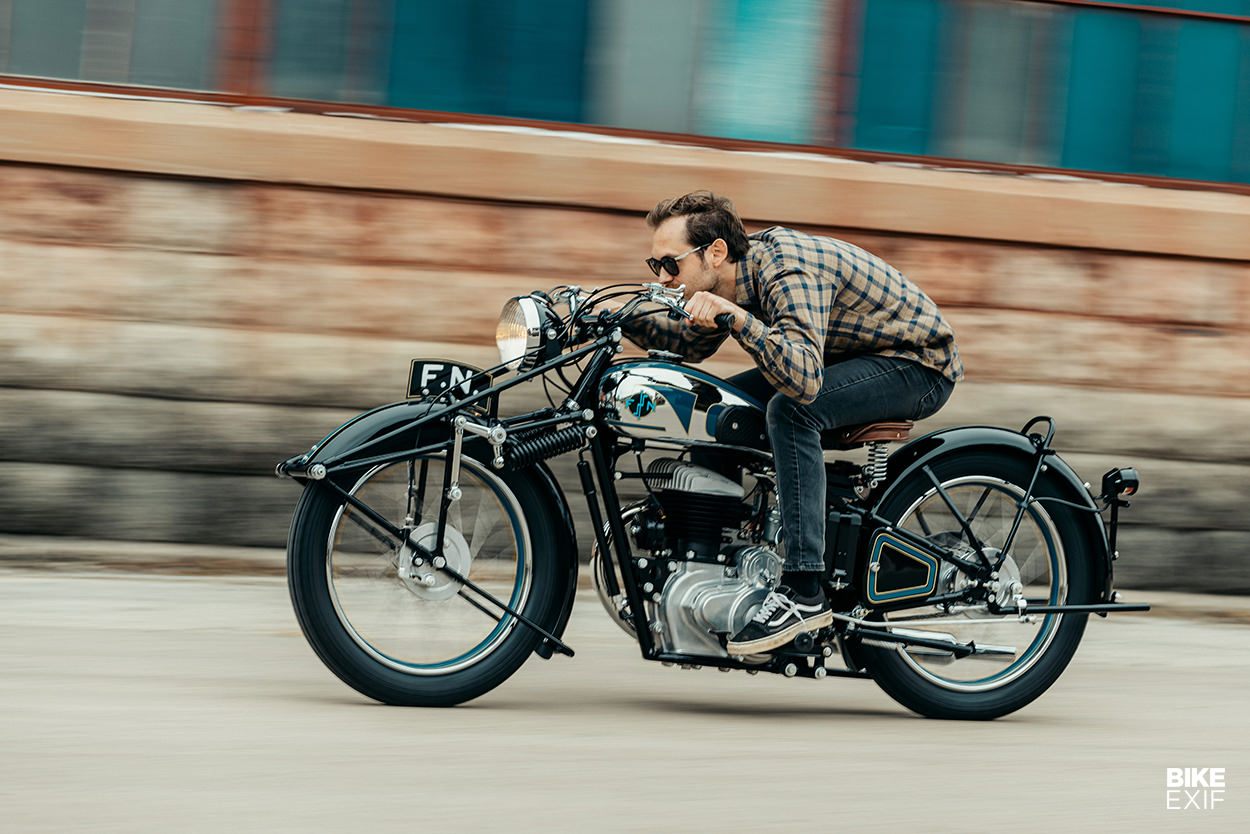 Is this the most accurately restored M13 out there today? Almost certainly. Even better, it’s solid evidence of a younger generation of restorers coming through—with the skills to keep magnificent machines like these in perfect running order. 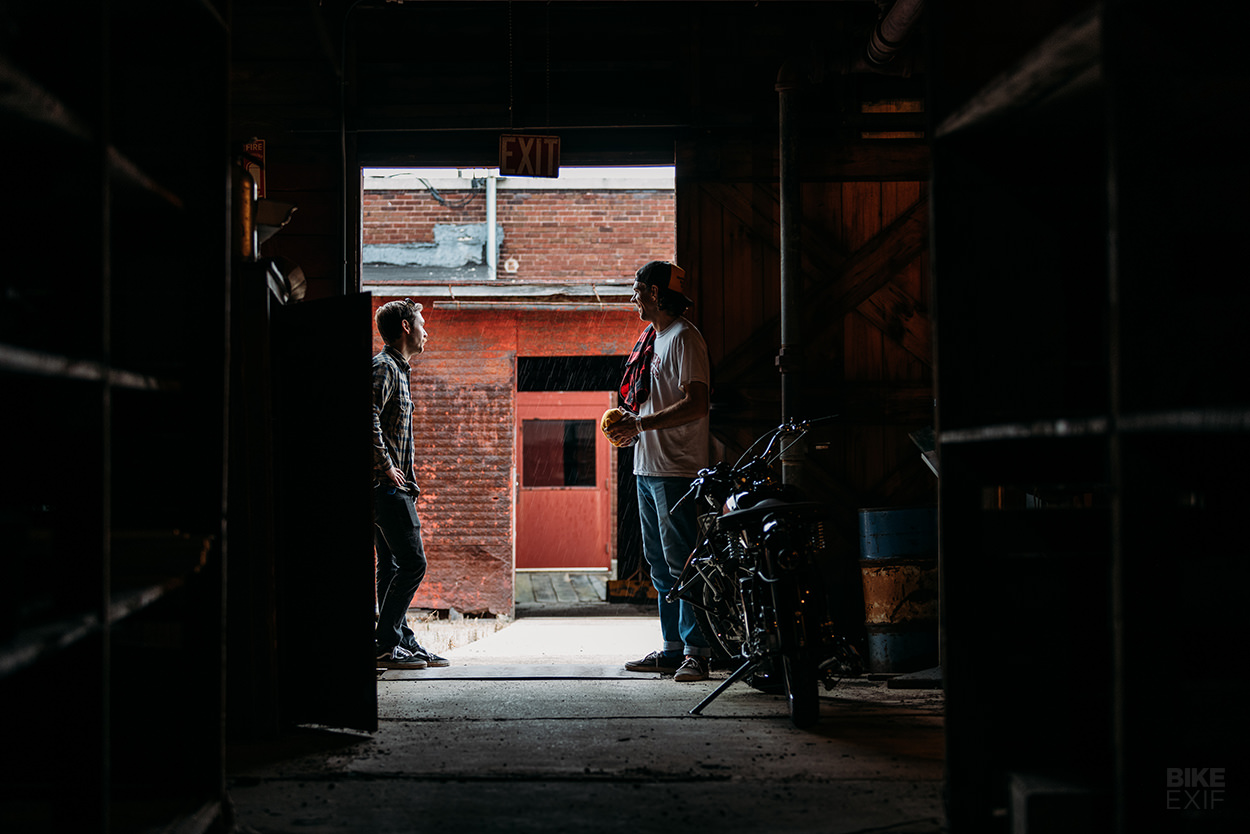 Lil’ Shredder: A Honda Super Cub scrambler from the UK